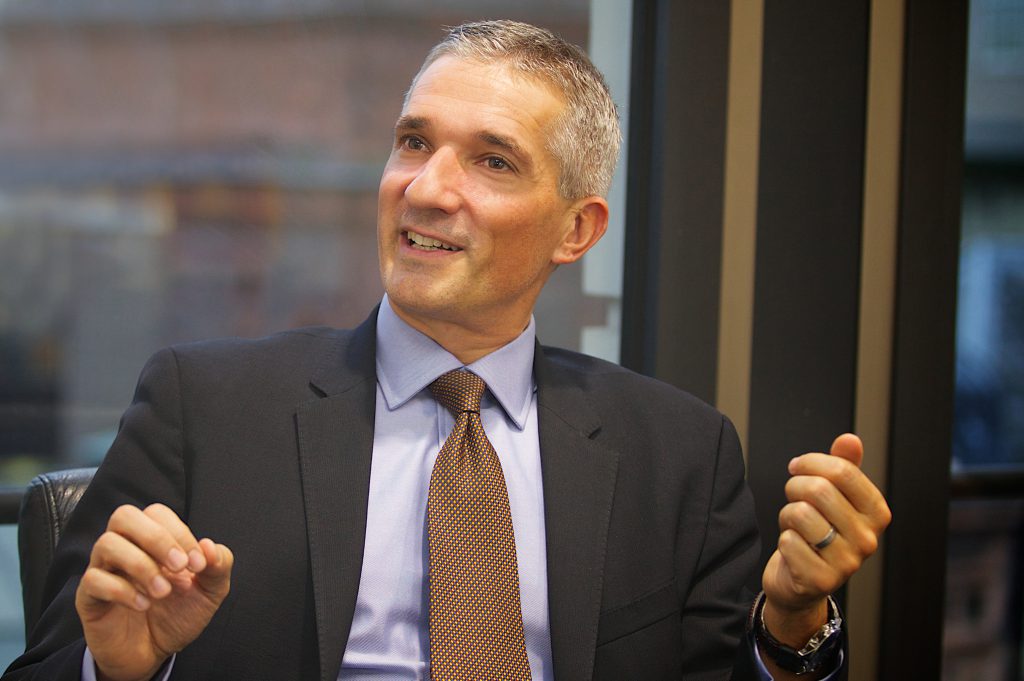 An interview with Christoph Frei , Secretary General of the World Energy Council

The energy industry is being reshaped by major forces, including decentralization, digitization, shifting demand and prices, and greater sustainability as a public policy issue. As the risks shift, so too do the opportunities. Last week in Dubai, Christoph Frei, Secretary General of the World Energy Council, spoke at Marsh’s Energy Industry Conference. BRINK caught up with Professor Frei after the conference.

BRINK: First of all, what risks to innovation do you see in the energy sector?

Christoph Frei: There are several key risk areas regarding innovation in the energy industry.

One of the main ones is decarbonization. If you look back over the past 45 years, we’ve managed to decarbonize gross domestic product by, on average, 1 percent per annum. If we want to achieve a change of two degrees Celsius, we must accelerate this from 1 percent to 6 percent per annum. The challenge of decarbonization is massive. We have a factor of 2.8 times more CO2 in our resources—coal, oil, gas—than we are allowed to emit.

Another challenge is innovation around electrification, decentralization and digitization. The one thing above everything else that is keeping energy leaders awake at night is the impact of digitization on the future of the energy system. New business models and digitization will define momentum on a path of innovation, which will change the way we produce and use energy in industrialized and developing worlds.

BRINK: What is the industry saying about its key risk concerns?

Prof. Frei: We have an issues map where we look at about 40 risk issues in the energy sector through interviews with 300 energy leaders in more than 90 countries. Over the past five years, this has shown us a very dynamic market. The risks that have heightened in importance most dramatically are decentralized systems, digitization, electric storage, market design, and renewable energies.

Issues such as carbon capture and storage have been cooling down—people just do not believe they will deliver on its promise. Unconventional, or renewable, energy is seen as less of a risk for the industry. Consider that 18 months ago, solar was being sold in Chile for 2.9 cents per megawatt. I recently spoke to several sources who said that this year they were probably looking at 2 cents per megawatt. That tells a story of continued crashing of prices.

In the automobile area, we have seen some very bold statements from governments, such as India and Norway, with France and the UK announcing the end of diesel and even gasoline by 2040. The real question is, when does China, which has less legacy supply chain and wants to reduce pollution, become a leader in electric mobility? They certainly have expressed this ambition and that will truly be a tipping point.

BRINK: What advances in technology do you see stepping up to play a bigger role in the energy industry?

Prof. Frei: A key challenge and opportunity is how to bring the Internet of Things to bear in the industry. For example, how do you leverage connected devices so that they can smart-trade with each other with very low transaction costs? Another application will be to automate billing.

BRINK: What role might blockchain and the Internet of Things play in the energy sector?

Prof. Frei: Ultimately, it means replacing physical assets through digitization. Is that possible in energy? We have seen it in other places such as the taxi industry, for example. We talk a lot about energy storage. This has great potential to accelerate decarbonization by leveraging existing assets. Your refrigerator, for example, which on its own is currently about 100 watts, but if you can capture a million households’ refrigerators and turn them all off at the same time, you then have a 100-megawatt power asset.

That is a very decent storage asset—and you haven’t paid for it, you have simply digitized an existing one. If blockchain enables things like that and removes intermediaries from some processes, you can see it making a real difference in the energy sector.

There is also a huge opportunity for the industry in reaching rural households and delivering access to solutions that simply are not possible without cheap solar, affordable storage, and digitization—solutions that can be provided via cell phones, for example. Mobile technology with cloud support already enables new financing models, such as micro-leasing schemes in the developing world and greater customer choice and control for all. These are transformative examples brought about by decentralization and digitization.

BRINK: What about the wider risk landscape—how does it relate to the energy sector?

Prof. Frei: As we all felt again last year, extreme weather events are, naturally, a huge issue for this industry. Over the past 40 years there has been roughly a quadrupling in the number of extreme weather events. This obviously has a dramatic impact on our thinking about how the industry can become more resilient. Locally empowered solutions could be the key here.

BRINK: What trends are you seeing in energy demand?

At the same time, electricity is the new oil. Electrification is firing demand, which will double by 2060.

As for renewables, the phenomenal rise of solar and wind will continue at an unprecedented rate and create both new opportunities and challenges for energy systems. Coal will probably peak in demand around 2020—and oil by 2040.

A key question is how quickly will storage for electricity be cheaper than the relevant counterpart? Natural gas will peak later, because in areas like China, India, sub-Saharan Africa, and particularly in Asia, demand is expected to grow rapidly. Roughly a quarter of the world’s natural gas consumption is in Asia. At first glance, nuclear looks like a success story because demand is still rising—but it is very concentrated. Two-thirds of the newly installed nuclear between now and 2060 will be in China.

The best energy policies that will master the transition to the new energy era will have a balance between security, affordability, and sustainability: We call it the Trilemma.

This interview was first published by Brink News on  16 March.